Like I said in the freebie post, I seem to only do Christmas scrapbooking nowadays. The rest of the year I'm busy with other crafts. But I still love it.

So the last time I wrote on my blog about December daily I'd finished 2010 and was working on 2011.

I can't seem to stop adding to my craft curriculum. This week's addition: sewing.

When I was weaving I got the idea to make some fabric for a small purse. One that would just fit my phone, keys and some cards to take on bike rides and hikes. I have one like that but it's ugly. Later on I found some lovely fabrics at a craft store and figured it would be easier to use those, and it would be more lightweight as well. But then I wasn't sure where to start. I read some things online but terms like fusible interfacing made me hesitate. I'd only ever done a few very simple and improvised projects on the sewing machine.

Then, last week, I happened to discover a new craft store in Woerden, VanJans, which was closed at the time. So I checked their website and lo and behold, they had a "sew your own bag" workshop this week!

I learned a lot during this workshop and the enthusiasm of the teacher was contagious.

Is another craft love born? I don't know but I did order this book:

There's a sew along blog and Facebook group hosted by the teacher of the workshop for this book and next year they start a sew along for part two. If I get into this I'll may buy that and join in....

Yes, I'm back for December scrapbooking. It seems the December daily project is the only thing getting me to scrapbook these past few years but I'm really enthusiastic about it once again.

Of course I wasn't quite up to date yet. Last year I wanted to get going on my 2012 album. I'd taken the photos and written the journaling but for that I'd used an online service that I then discovered had shut down. Bye bye journaling. I was disheartened. I did take,pics and do all the journaling for 2013, and made a cover, but that's as far as I got. So a few weeks ago I made a plan. I made 6 collages that summarized 2012's December to add to the 2013 album. Print, stick them in, done! I also selected and printed all the 2013 photos. I've got the first 5 pages done completely. Hopefully it's all done before December 2014 ends.

So yesterday I was just looking around for some date tags, preferably cuttable on the silhouette, for this year's album when I thought maybe I could make something myself. I wanted to include the weekday this time. I downloaded an app called inkpad to my iPad and started drawing. I decided to make tags. 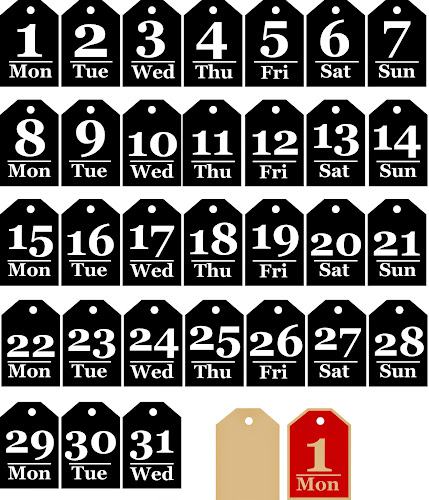 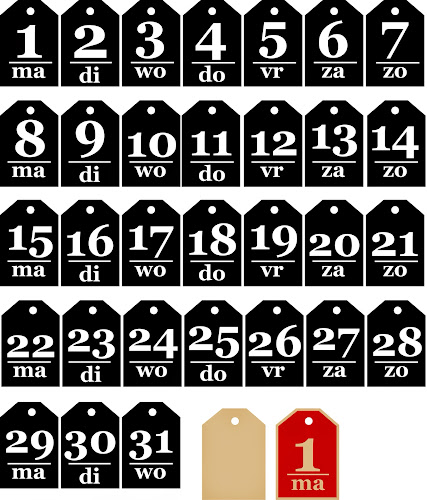 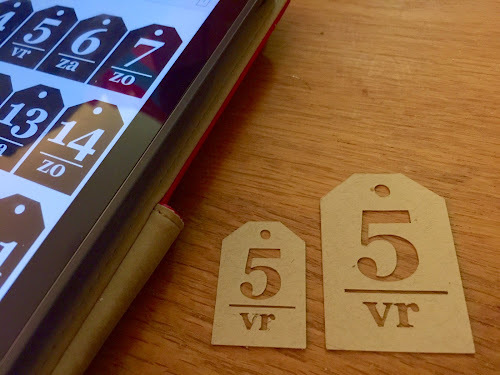 I am still deciding between Dutch and English so I made both. I loved making something on the iPad that I can cut using the silhouette. I might do more designing someday and start a little shop for digi files but for now I'd like to share the December daily 2014 tags with you.

I included a slightly larger tag in the svg/dxf that you can stick behind the number tags.

Here's the links for the files, feel free to share, just link to this blog post please, not the direct download, so your friends know where it came from.

I haven't been very good about updating my blog.... Again! So I'll keep this brief.

My main project for 2013 was this huge temperature Amineko.

Recently I got interested in coloring Magnolia (and the like) stamps using Distress ink. I'd been looking at Copics from time to time but I'm one of those people that would want all available colors and that's just WAY too expensive. Besides, I wasn't sure if the marker thing was for me. But then I read more and more about coloring with Distress inks. I had about 10 colors and I had some watercolor paper so I gave it a shot, and I loved it. So I went ahead and got the rest of the colors (some in ink pads and some in reinkers)

Yes!! I have a scrap room! Well, that is, it's still a combined room (scrap & office/computer) but it's a lot better than the tiny corner in the bedroom I had. I managed to squeeze quite a bit in there but it really was a squeeze.

When I moved I had a pretty good idea what I wanted for this room so the basics where done pretty quickly but it took me some time to organize all my stuff the way I wanted. And now it's finished. Well, pretty much, there's still a few details to do but I want to show you what it looks like now.

Hi! Thanks for having a look around my website.

My name is Karin, I'm a 30-something creative girl with some nerd-like tendencies.